On April 23, a Chinese court finished hearing arguments about a curious lawsuit. In 2019, a businessman from southwest Yunnan province identified in media reports by his last name, Zhang, sold an 18-kilogram rock of raw jadeite to Ma, the president of a well-known steel company, for 80 million yuan ($ 12.4 million). Although Ma knew the risks of buying uncut jadeite, when he opened it he was nonetheless irritated to learn that his purchase was worth much less than he expected: only 4 million yuan. Telling Zhang that he would like to try again, he asked the broker to go to Myanmar to buy another stone. But when Zhang brought the second piece to Ma’s company, Ma grabbed it, refusing to pay until he received a refund for the first. After failing to come to an agreement, Ma called the police, and Zhang and his associates were subsequently charged with fraud.

At the heart of the matter is an ancient practice that is currently undergoing a mass revival. Known as the “stone game,” it has long been a popular method of trading raw jadeite across the Sino-Burmese border. The outer layer of some jadeite stones is so weathered that it is impossible to judge the quality of the mineral underneath: it is only after being cut that appraisers can determine their true value. Some thrill-seeking players take advantage of this by purchasing Uncut Jadeite in the hopes of making it rich. The highest quality, flawless and almost transparent jadeite can fetch huge sums in the free market. One of my interviewees spent 50,000 yuan for a stone; when he opened it, he found a piece worth 20 million yuan. If Ma’s bet had paid off, he could have sold the stone for hundreds of millions more than he paid. Instead, he claims that Zhang tried to pass off shoddy Guatemalan jadeite like stone from Myanmar.

A GIF shows the process of cutting a rough stone to determine the quality of the jadeite inside. From user bilibili 边境 淘 客 光 哥

Generally speaking, the best specimens of jadeite are collected by the mine owners themselves, or sold to collectors around the world. Some are presented at public auction in Myanmar. The rest is divided into two lots, one being transported by sea to Hong Kong and Guangzhou in southern China, where the stones will be cut to produce high quality jade jewelry and other products. The other is transported by land to Ruili, just across the Myanmar border in Yunnan. Proximity to town, low logistics costs, and lack of jade craftsmen make it a good place to unload rough stones of unknown value.

The region has a long history as a center of both the jadeite trade and the stone game. According to historical records from the Qing Dynasty (1644-1911), jadeite traders along the Sino-Burmese border would speculate on the quality and color of jadeite based on the characteristics of its weathered outer surface. A host of folk customs for picking stones had emerged at the beginning of the 20th century. For example, before betting on a stone, buyers would kill and simmer a rooster over a year old, eat its head, and look at its bones to see if they should make a purchase. Others burned incense, maintained a vegetarian diet, and abstained from sex while performing a four-day observation ritual on the stone of their choice in the hope that its true value would be revealed to them. .

Others burned incense, maintained a vegetarian diet, and abstained from sex while performing a four-day observation ritual on the stone of their choice.
– Zhou Fangliang, enthologist

After the founding of the People’s Republic of China in 1949, this hitherto prosperous cross-border trade was suppressed by government regulation of luxury goods. It was only with the ‘reform and openness’ of the 1980s that Ruili regained its status as the center of the jadeite trade, paving the way for a stone game boom in the 1990s.

At the time, Ruili did not have a dedicated jewelry market: most of the jadeite stones for sale were stored in a few local hotels. Every morning, brokers – mostly Shan and Kachin ethnicities from Myanmar or Burmese citizens of Chinese descent – waited for buyers under a huge ficus tree, a local landmark. When a buyer arrived, he would take them to a hotel to view the goods. Brokers have played a central role in every transaction. Many had worked as jadeite miners in northern Myanmar and were therefore familiar with the sources of jadeite. According to a broker who has been in the industry since the 1980s, buyers always bring gifts to middlemen in the hope of getting inside information.

The 1990s were a chaotic time for jadeite traders. Myanmar merchants saw the opportunity to make their fortune quickly from tourists in Ruili and soon began to produce fake jadeite. Some of their techniques were quite rudimentary, like filling stones with green toothpaste to make them appear green when held in front of a lamp.

Eventually, tighter border controls and the impact of the 1997 Asian financial crisis burst the stone game bubble, and Ruili entered a period of stagnation. It would return after 2000, when a “border trade zone” offering duty-free transactions opened in the region. The game of stones was adopted by the first batch of jewelry markets to open in the city and reached a new high between 2009 and 2013. Legends of gamblers who got rich overnight have circulated throughout China, attracting speculators to Ruili and skyrocketing the price of rough stones. . To meet the growing demand, the markets remained open until late into the night, giving Ruili the appearance of a casino town. Most foreigners had no expertise or knowledge of the jade trade, and their blind bets often left them on the verge of bankruptcy. Since then, there has been a proverb in the stone-playing circles of Ruili: “We will win big, we will lose, we will end up in rags.” 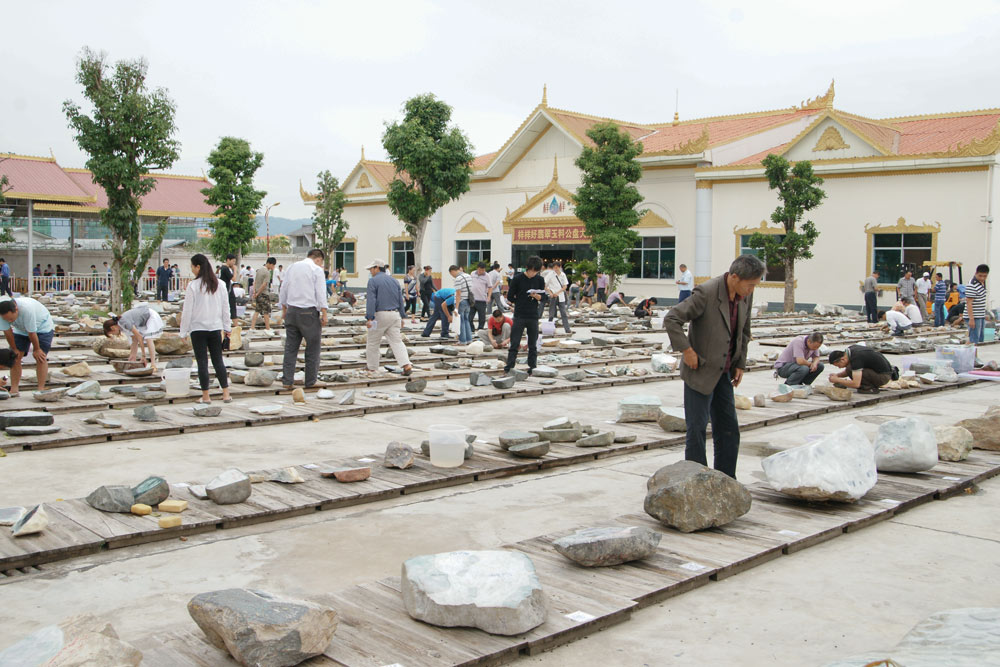 Awareness of the risks associated with playing stones has increased since 2014, and for a while it appeared that the practice may decline. Instead, the rise of live-streamed stone game events has taken the craze to new heights.

Starting in 2018, merchants used the feeds to attract new stone players from across the country. One of my research participants, an electronics company owner in the eastern city of Hangzhou, is an amateur collector of raw jadeite and a fan of live gambling. At first he just looked at the jadeite stone appraisals, but after a while he decided to give it a shot. “When I watch them open the stones, I feel like I’m watching a jewelry appraisal show – it’s so exciting,” he told me. “After a while, I felt like I had gained a bit of expertise in jadeite, so I started buying cheap stones for fun. Now the more I buy, the more addicted I get.

The livestreams have given up the secrecy and regional limitations that originally defined the stone game.
– Zhang Fangliang, ethnologist

The livestreams have given up the secrecy and regional limitations that originally defined the stone game, making the practice more accessible outside of Ruili and giving the audience a greater sense of participation. Usually the streams start with a brief introduction to the rocks of that day. If a viewer asks for a closer look, the streamer will give a more detailed description, while audience members will guess its value. Once the purchase is complete, a buyer can have the stone shipped directly or have the streamer open it live on camera. It is lucrative work. Last year, a leading jadeite live broadcaster could move 1 million yuan worth of goods in a single evening.

To boost audience engagement, live broadcasters go to great lengths to make their businesses and stones look authentic. Some will ask a Myanmar resident to come out of a river with a cradled jadeite stone in their hands, or say that a stone is an heirloom they are selling to save a seriously ill family member. Other merchants offer to help make products from raw jadeite stones once they are purchased and opened, only to send an already made product from the market to the customer and keep the rough stone for themselves. 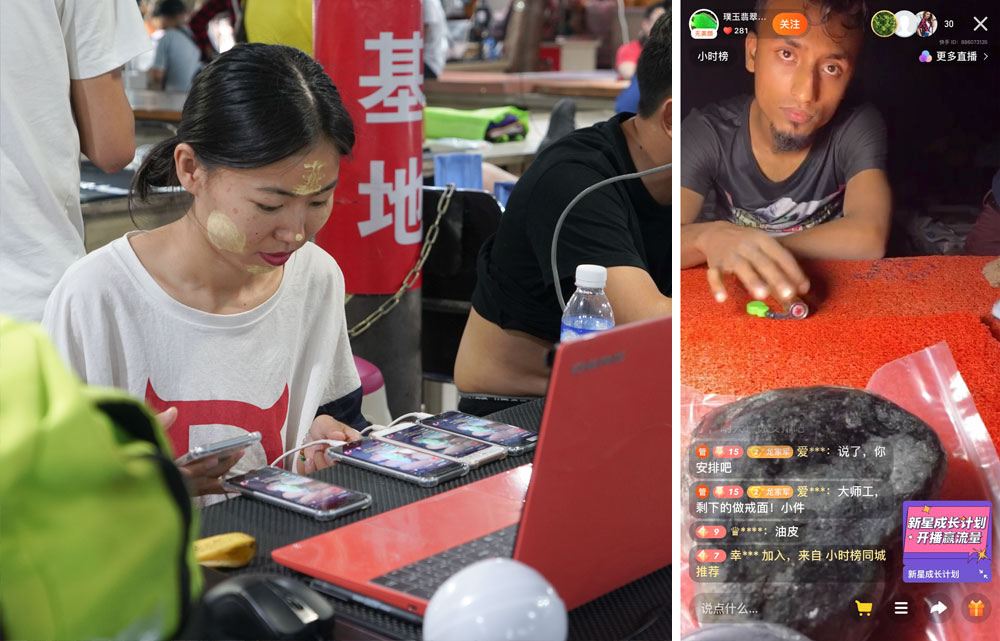 Left: A woman watches live broadcasters at a jewelry market in Ruili, Yunnan province, 2020; Right: A screenshot of a live broadcast of stone gambling. Courtesy of Zhang Fangliang

Live streaming has reinvigorated Ruili’s stone game industry, despite a growing imbalance between supply and demand: good jadeite is increasingly scarce, while the ranks of high-paying online gamers continue to grow. multiply. Some players in the stone game industry have even started visiting jadeite experts in countries such as Taiwan and Hong Kong to purchase raw jadeite that was initially sold before the reform and opening up, which they report. then to Ruili and sell back to the players. City vendors seem divided over whether the live-streaming boom is a good thing, or just a short-term rebound, but there’s one thing everyone agrees on: the game of pierre is here to stay.